Is a Voltage of 11.8 Dangerously Low for My AGM Battery?

hi youtubers jeff cote here with ask pys so we've got a question from richard and richard's a fellow boater uh and he's got a battery bank of agm 16 house batteries and when he discharges his battery bank and about 50% state of charge which is sort of if your battery bank is 100 then 50 is in the middle so sort of another term for that is 50 of capacity or 50 depth of discharge dod starts from the top which is zero and all the way down so from zero to 50 is 50 dod from the top all the way down to 20 of capacity is 80 dod okay so dod stands for depth of discharge but in this instance battery capacity is another way to look at it so it's either 50 capacity or 50 dod and at that depth of discharge he's got a battery voltage about 12.1 volts which by the way is kind of normal because 12.2 on a flooded lead acid or lead acid battery 12.2 under no load is a 50 depth of discharge so 12.1 under use is totally normal but he asks if i were to take the battery down to 30 state of charge right which would be 70 dod wouldn't the voltage drop dangerously low and the key word here is dangerous to 11.8 well why is it dangerous right battery voltage you know when you start your engine the battery voltage can go down to 10.5 11 volts 10 volts i've seen nine and a half volts the starter it's not dangerous to have a battery voltage that is 11.5 11.8 the question is what are going to be happening to the loads actually running at that voltage if you wired your boat properly because remember 11.8 is a starting point you're going to have light loss and you hear about this all the time it's this concept called voltage drop meaning the voltage of the battery is the highest voltage for a load and as you go further and further away you're going to have lower and lower voltage so you can have 11 8 of the battery but you could have a light far far away that only has eleven two or eleven one and if it's a badly wired boat bad crimps undersized wires you know people that cut those corners people that drive us crazy it could be ten and a half so there's nothing dangerous about being an 11.8 on your battery voltage the question is is your boat's wiring done properly so that you can have a battery voltage at 11 8 11 5 and your loads which are further further away from the battery can run without any problems and that's really the bigger dilemma but there's nothing wrong to bring a battery to 11 8 or 30 state of charge 70 dod as long as you remember this in life nothing is free the more you bring down your battery deeper of course you're going to compromise cycles but the whole purpose of the battery is to be used so i hear people say oh jeff i never bring my batteries down below 90 i'm like you're wasting your time and your money you know the batteries are meant to be used do it knowingly and sometimes going down to 30 on agm is fine because the alternative is what recharging the battery recharging the battery how right so it's okay to bring your batteries down to 30 or for instance a firefly i have boat owners that bring their firefly batteries down to 30 regularly it's not bad it's a choice and it's a good choice it is because often it doesn't make sense and it's not practical to deplete your battery bank and keep it at 80 or 90 all the time why have so much capacity if you're not using it and that's why it's okay to bring your batteries down to 30 percent of capacity and have 11.8 volts 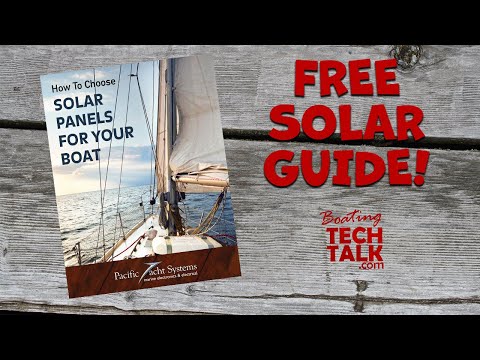 How To Choose Solar For Your Boat - FREE Guide