Is Your Navigation Equipment In Need Of A Makeover? 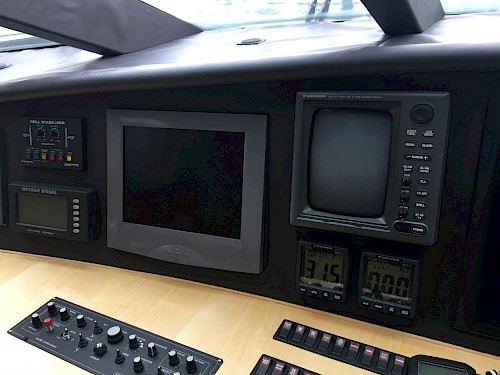 This month we take a look at a recent navigation system installation and get the owner's thoughts.

There is an old saying that “you shouldn’t throw the baby out with the bathwater” but what happens when you purchase a boat, or own a boat, that has a collection of different systems, from different manufacturers, that may have been high quality but are now dated and don’t allow for integration?  Should you get rid of everything and start over?  Or is there an opportunity to use some new technology to re-purpose some of that gear?

We recently worked with a boater who purchased a 28 metre yacht. The owner had previous boats in this size range and wanted one cohesive system that would allow his family to cruise the Pacific Northwest safely.

Putting Together A Plan. The boat has two helms, an upper and a lower.  The lower helm serves as the main bridge and is used the most however it consists of a number of different systems all of different vintages. The majority of the equipment was quality Furuno gear but it was dated and did not integrate all of the systems.  The sounder was very sophisticated, there were two radar systems that were independent of each other and did not overlay on the chartplotter, which was not user friendly to all potential boat operators.  At the end of the day, the boat owner wanted a navigation system that was as intuitive as using an iPad.

The main helm is over 5 meters long and .5 meter high.  There is a lot of room but no cohesive layout to the navigation and communication equipment.  Because all of the equipment had been added and tweaked over the years, it was not cosmetically uniform and there was no consistent view.  As part of the initial consultation, we worked with the owner to determine what would stay and what would go.  He wanted to re-design the entire helm to give it a straightforward and modern look.

Another driver was providing a navigation system that was intuitive and did not require a steep learning curve. Allowing other qualified operators to quickly utilize all of the electronics for navigation. After the consultation, the owner was given a complete suite from each of the major electronics' players but chose the Garmin solution because of its ease of use, reliability, and integration possibilities. "I had used Garmin in my airplane and always found it fast and easy to navigate to the necessary information," said the owner. "In that situation, I had to have the information at my fingertips."

Choosing Your Navigation Gear. At the core of the new lower helm, are three Garmin GPSMAP 8422 large format multifunction displays featuring a 22-inch full HD screen with touch control.   Each screen is sunlight-readable, anti-glare and includes auto-dimming for use in low light or at night.  In-plane switching (IPS) LCD display, a first for the industry in this class, provides consistent, accurate colours from all viewing angles.  The screens can be flat-mounted however the owner chose to flush mount the screens, edge-to-edge, to create a sleek glass helm look.  The owner likes the cockpit design because it is "big, bright and easy to understand", he says "if you can figure out navigation on an iPad then you are already 75% trained to use this new helm."

On the upper helm, the owner chose two Garmin GPSMAP 7412 12-inch, multi-touch widescreen displays with a 10Hz internal GPS that updates position and heading 10 times per second.  Like the 8422, this chartplotter includes all of the conveniences of built-in Wi-Fi connectivity.

The Sounder. For the sounder, we recommended a GSD24 Advanced Sonar Module for superior target definition, remarkable clarity and deep-water performance.  Thanks to the easy connectivity of the Garmin Marine Network, once connected, the sonar data can be shared on all of the chartplotters on the network.  Another benefit of the network’s high-speed connection is ultra-fast screen updates with minimal delay but the biggest benefit to the owner was that the GSD24 blackbox ships with a transducer adapter.  This terminal strip allows boaters to manually connect many existing transducers to make it compatible.  This was a big win for the owner and saved him from the onerous and expensive task of hauling out the boat to replace the existing Airmar transducer and Wesmar sonar. During the next scheduled haul-out he may choose to upgrade but it was not required for this installation.

The Radar. The owner also wanted two radar systems, one for offshore use and the other for inshore and to serve as a backup or to be left on at anchor.  The first radar, that the client chose, was the Garmin GMR 2524 xHD2 open array radar and pedestal.  It is the only 4-foot 25kW radar that fully integrates with Garmin chartplotters and provides data overlay onto charts.  Two additional options include dynamic auto gain and sea filter to automatically adjust to the boat’s surroundings for optimal performance in all conditions.  It has a range of 96 nautical miles with a narrow 1.8 degree beam.  The second radar system we installed was the Garmin GMR Fantom 24 radome, a high power 40W radar with a 3.7 degree beam and a range from 6 meters to 48 nautical miles.  The low power consumption, instant turn on and no delay warming up, makes this the perfect radar for inshore navigation and anchoring.  It also features a mini-automatic radar plotting aid (MARPA), which tracks up to ten selected targets, helping the owner keep track of other vessels and avoid collisions. Both units include dual radar support, which provides redundancy and the ability for each chartplotter on the boat to select data from either radar source.

Adding AIS. Another great collision avoidance tool is AIS.  We installed the Garmin AIS 600 Blackbox transceiver which allows the client to receive AIS target data as well as transmit his own vessel information to other AIS receivers in the area.  This particular model uses ClearTrack technology to ensure that there is no interruption of AIS traffic position while the VHF radio is in use.  It integrates with the Garmin chartplotter and VHF radio via NMEA 2000, giving the owner the ability to call any MMSI target directly from the chartplotter using the “call with radio” function.

In order to keep the look of the helm consistent, the client chose the Garmin VHF 210 fixed-mount marine radio.  This radio is designed to complement the appearance of the GPSMAP 7400 and 8400 series chartplotters.  The owner also purchased the Garmin GHS20 remote VHF handset so that there were no annoying cords hanging on the helm equipment.

Cameras For Navigation & Safety. After reading an article on the benefits of cameras onboard, the owner decided to go with four.  One in the engine room to view both engines, one on the aft deck looking down for easy docking, a fisheye on the navigation tower looking aft for visibility and one forward of the radar tower to see oncoming traffic.  He chose the Garmin GC10 because of the rugged housing that makes it durable and water resistant, perfect for the marine environment.  One of the GC10’s is a reverse-image camera that reverses the video on the chartplotter screen, which is perfect for backing out of tight locations.  After a few months of use, the owner would say that he uses the engine camera the most however, when he is operating the boat by himself, it is great to have an extra set of eyes all around.

Let's Get Integrated. Now that the owner had selected the equipment, it was time to sit down and really explore the full system integration.  The Garmin 8422 charplotters that were installed also included a free software upgrade to take advantage of the Mastervolt CZone digital switching system.  CZone intelligent technology allows the owner to control circuits such as lighting, power monitoring, tank monitoring, bilges, and hatch or porthole status, either through the helm or programmed into a remote key fob, or an app on a smartphone or tablet.  The boat’s original alarm panel was analog, had super bright lights and only indicated failures from the lower helm.

The GPSMAP 8422 also includes presets for sonar, radar, cameras, media and digital switching, which can be independent or incorporated into SmartMode. With SmartMode control, the owner can quickly change all the screens at a helm in sync to a preset mode, for example, fishing, docking, night cruising, etc.  One-touch access allows the owner to switch all monitors in sync from one mode to another without manually switching each monitor separately. Fully customizable layouts, data and gauges allow the owner to place the information he needs to see right where he wants it. This solution provided critical alarm information for the upper helm that wasn’t there before.

During our initial design meeting, the owner emphasized the main focus of this upgrade was integration, safety and ease of use.  He was looking for a navigation system that was intuitive and did not have a steep learning curve. Although most boaters are well versed in paper charts, at the end of the day we entrust our lives to this equipment.  PYS has been a Garmin Service Center for over 10 years and we have seen very few repair or warranty issues.  Garmin gear has been well proven to be reliable and was a perfect fit for this upgrade.

We asked the owner what advice he had for a boater who was thinking of upgrading and he said, "I attended the Fort Lauderdale Boat Show and had the opportunity to try a lot of different products. I wouldn't recommend bargain hunting when you are replacing navigation equipment.  If you do it right it will be expensive, but it is worth it."