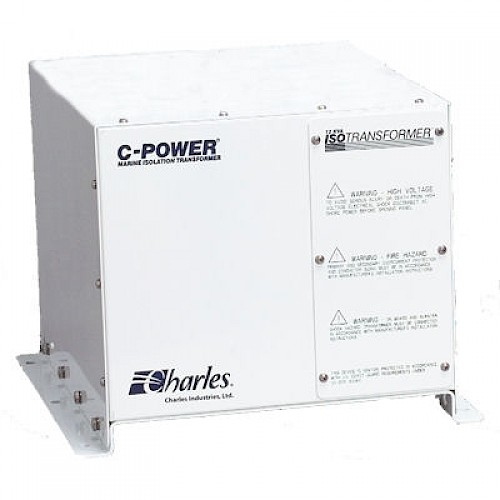 What are the electrical questions to ask when importing a boat from Europe to Canada?

The ability to source and purchase a boat on-line has been a game changer in the marine industry. Boat buyers not only have the ability to choose from a global selection of makes and models but can also take advantage of fluctuating currencies and lower duties.  The current duty rate for importing a pleasure craft into Canada is 9.5%, plus the import GST.  However, once the boat is in Canada, the boat’s AC electrical system might not be compatible to our North American AC electrical standards.

A boat that is wired for the European market is not compatible with North American AC electrical standards and will not be able to connect to shore power.  First, we will look at the major differences between these two systems and then we will look at a couple of different solutions.  When you are looking at a boat, consider the year of manufacture and the electrical specs.  Here are a few things to look for:

Electrical Appliances - some appliances can run at either 50Hz or 60Hz with voltages ranging from 100 to 240.  They must be dual-frequency and multi-voltage or they will not work.  If the boat was built pre-1990, it is less likely to have dual-frequency appliances.  Many fridge and air-conditioning motors and compressors can be sensitive to the wrong frequency and could overheat.

Generators -  Newer AC generators can usually be converted, but the older generators may not offer this option. Conversion also changes the speed at which the generator operates at and may increase the noise level when going from 50Hz to 60Hz.  One desirable feature of conversion from 50Hz to 60Hz is an increase in the power available by 15-20%.

Inverters -  Manufacturers build inverters for a certain amount of current, voltage and frequency measured in Hertz or cycles.  There are several things that can happen if you run a higher electrical current through a 50Hz inverter.  A connected AC motor runs slower, the internal current increases, the wattage decreases and the cooling decreases causing the insulation to deteriorate and it could burn-out and catch fire.

Electrical Outlets -  European boats are designed with European appliances in mind and have receptacles that are different from North America.  If you are intending on using the boat around the world, then you could install a smaller, separate AC panel with a few North American receptacles in areas, such as the galley, to run some AC appliances and charge electronics.  Otherwise you will have to replace the receptacles and the wiring.

Circuit Breakers -  Circuit breakers need to be sized accordingly to protect the conductors they are connected to.  Consideration should be given to this during a retrofit and during the assessment phase.

Battery Chargers – Most modern battery chargers will work fine on just about any voltage source and frequency.  Be wary of older units that use transformers which may need to be upgraded.

A Complete Retrofit. Now that you know some differences to look for, what are your options?  The first, and most expensive option, is to completely retrofit the boat.  This could mean replacing the shore power receptacle, main AC panel, and wiring depending on what components in the system can safely be reused.  This works if you have found your forever boat, at a great price and in great condition.  It also makes sense if you are don’t intend to leave North American waters and have no need to run both the 50Hz and 60Hz systems.

Isolation Transformer. If you don't want to go that route, the second option is to install an isolation transformer designed to boost the 120V to 240V.  Specific isolation transformers can raise the shore voltage to deal with voltage drop and can be used to adapt the vessel’s internal power system voltage to a higher or lower shore power supply.  This seems like a very easy solution however, isolation transformers are expensive. They are also made of significant amounts of iron and copper, both of which are not light materials.  A typical 120V/30A transformer can weigh almost 100 pounds while a typical 240V/50A unit weighs almost 300 pounds. The reason for the weight and size issue is due to the low frequency of our power grid, 60 cycles.  On the positive side, using an isolation transformer does enhance electrical safety and mitigate galvanic corrosion issues related to ground currents from shore.

Also, a traditional transformer is not that versatile and could require complicated switching arrangements or rewiring to allow it to perform multiple tasks like boosting voltages.  This will provide compensation for line voltage fluctuations but it doesn’t provide full protection from spikes or over-voltage conditions.  Keep in mind, some specific isolation transformers can convert 240V to 120V or 120V to 240V but no transformer can convert from 50Hz to 60Hz. Therefore, all AC appliances, when connected to a North American shore system, will have to be able to run at 60Hz.

Run Two Compete Electrical Systems. If you are planning on boating around the world, the third option is to install a new AC sub-system and, in essence, run two complete and parallel systems.  The sub-system would be powered by batteries and would be capable of running light AC loads or intermittent loads but no large AC loads such as hot water or an AC water maker.  The primary purpose of this system is to use an inverter to run your European AC loads and then a new charger to replenish the batteries and offset the DC draw used to run the inverter. Basically, the batteries act as a translator allowing the inverter to power your European AC appliances and the charger connected to North American shore power replenishes the battery. Realistically, this approach will only give you 10 – 15 amps of intermittent AC service.

Boating around the world has become far more accessible and there are more and more realistic options available than ever before.  Many boaters are embracing the idea of purchasing a boat overseas and cruising for a few years before returning home with the same boat.