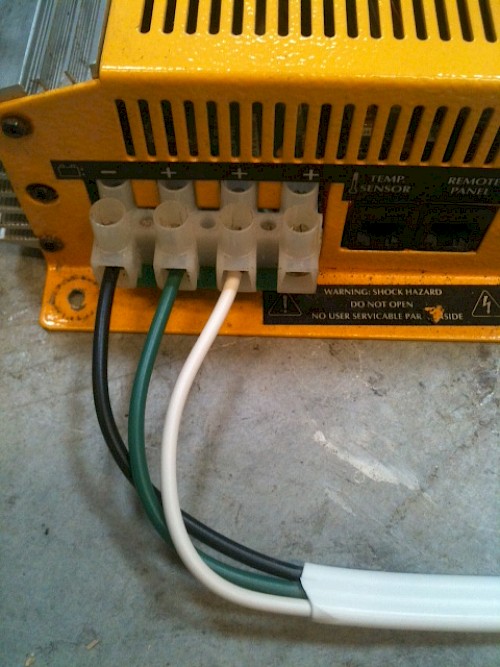 The Importance of Proper Wire Colours

The other day PYS was sent to troubleshoot a boat that had recently changed marinas. At the new marina, the dockside shore power breaker tripped every time the boat was plugged in; however, they had had no problems at the past marina. The vessel was a small sailboat with only 3 AC circuits so there wasn't a lot to troubleshoot.

Our technician determined that it was the battery charger circuit that was causing the problem. The AC wiring at the charger looked fine -- well, at first glance anyways. Someone had taken the easy way out and decided to run a 14/3 wire from the 10A charger to the AC panel (normal) but then used the same 14/3 wire to run from the charger to the two battery banks. Black for ground, green for positive on bank 1, and white for positive on bank 2. So there were two identical 14/3 wires connected to the battery charger. Sure this works, but it is NOT correct. It's confusing to trace, it's unsafe (having voltages on different coloured wires than what you would expect), and it can lead to simple problems that shouldn't happen -- like what happened here.

Someone had mixed up the 2 wires at the charger and connected the AC feed to the battery output on the charger and the battery wires to the AC input on the charger. The charger was fried and was causing problems on that AC circuit since the AC wires were connected to the battery output. We put in a new charger using correct DC wires and the shore tripping problem was solved. Had the proper colour wires been used the first time, this problem could have been avoided. The owner wouldn't have needed a new charger, or me and my troubleshooting time. As to why he didn't have problems at the past marina, it was probably a ground fault interrupter (GFI ) vs no GFI at the old marina (he was plugging into 15amps). We have no idea how his batteries didn't die as the charger had been put in over a year ago! It was probably fried on day one.