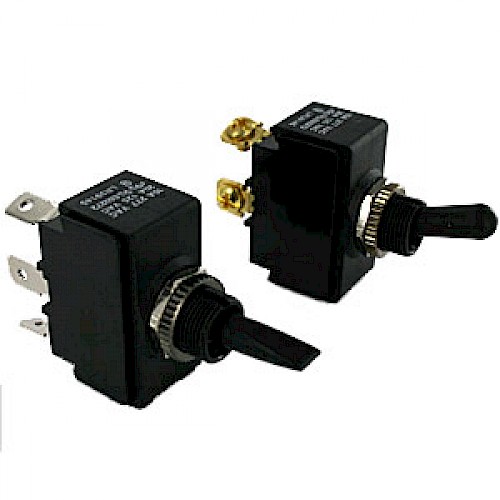 First, a switch is a device that controls the flow of electricity by either stopping the flow (the switch is “off” or more correctly it is “open”), or by diverting the flow as with a changeover switch. When the switch is “on” it is more correctly referred to as “closed”; this basic distinction leads to the concept of an opening or closing the circuit via a switch. Switches come configured as normally open (n.o.) or normally closed (n.c.) depending on the nominal state.

A switch’s function is designated by the number of circuits controlled by the switch (poles), the number of contacts, or electrical pathways that the switch controls (throws).  In the simplest configuration, an on/off switch would be a normally open, single pole single throw switch (n.o. SPST); one line in and one line out with actuation closing the circuit.  A single pole double throw (SPDT) is also sometimes referred to as a “change over” switch (SPCO). In this switch, the actuation will divert the flow of electricity from one pathway to another.  A double pole single throw is like two SPST switches controlled by one actuator, while a double pole double throw is equivalent to a two SPDT switches controlled by a single actuator.