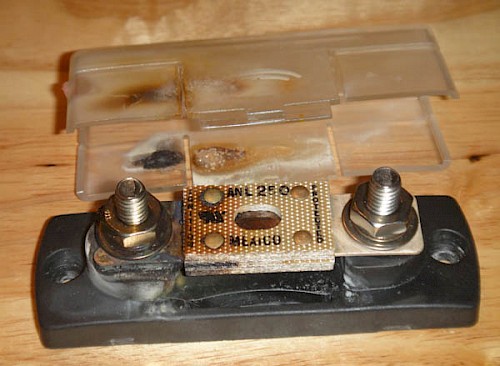 Shown here is something we see far too often: connections with signs of overheating. In the image, you can see the heat resistant plastics are melted and the fuse has scorch marks on it. In this case, the cause was probably as simple as a loose connection, someone not tightening the nut down enough. Or maybe they only threaded the nut on finger-tight with the intention of coming back later with a wrench to cinch it down, but forgot.

These are simple oversights that can be hard to detect before a problem arises. Even if you put an ohm (resistance) metre across a finger-tightened connection you would probably measure 0.0 ohms (no resistance), but when the current increases, these connections start to go bad. The situation can be compared to a two-lane bridge over a river. If the bridge is in the country and does not see much traffic, there aren't any problems; however, if you put that two-lane bridge in the city during rush-hour, the traffic will back up for miles. As more and more electrons try to flow through this weak point, the greater the resistance will be. Resistance produces heat and heat causes more resistance, resulting in an unpleasant cycle.

In this particular case, the heat generated caused so much resistance that the voltage drop across the resistor caused the device to not turn on. Nevertheless, something like this burnt fuse holder could have easily started a fire.