Stanley had been having problems with the electrical system on his 52-foot Activa, Amenity—no one could explain why the batteries just would not hold a charge. He described this when he met PYS at a recent boat show and arranged for them to carry out an electrical audit.

PYS discovered that the boat’s two alternators were of different sizes, with a small alternator on the port engine charging all the loads associated with both engines and even the thrusters. The starboard engine had a large alternator, but it charged only the house bank. The port-side alternator couldn’t keep up with the power demand of the engines, and the engine batteries were actually draining while running the engines.

"I’m very impressed with PYS’ quality of work and the installation their staff performed," states Stanley. "I couldn’t see any way they could have done it any better."

PYS replaced the smaller alternator and rebalanced the charging system through the use of Battery Combiners and Battery Isolators, so that both port and starboard engines would recharge all battery banks. Now Stanley is confident that he won’t lose power when out on the water, which he describes as “a big improvement in boating.” 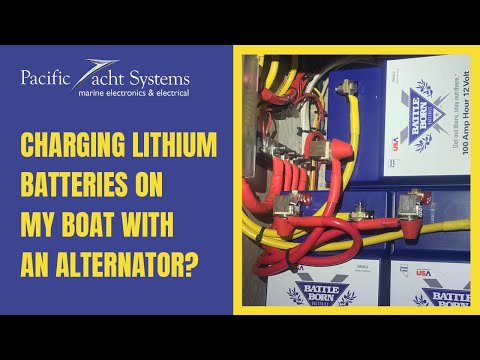 Videos
Is It Safe to Charge My Boat Batteries With Solar and the Alternator at the Same Time?

Videos
I Am Upgrading My Alternator, How Will This Affect My AGM Batteries?

Boating Tech Talk
Inverter and Alternator Connections Directly to the Battery via a Busbar?